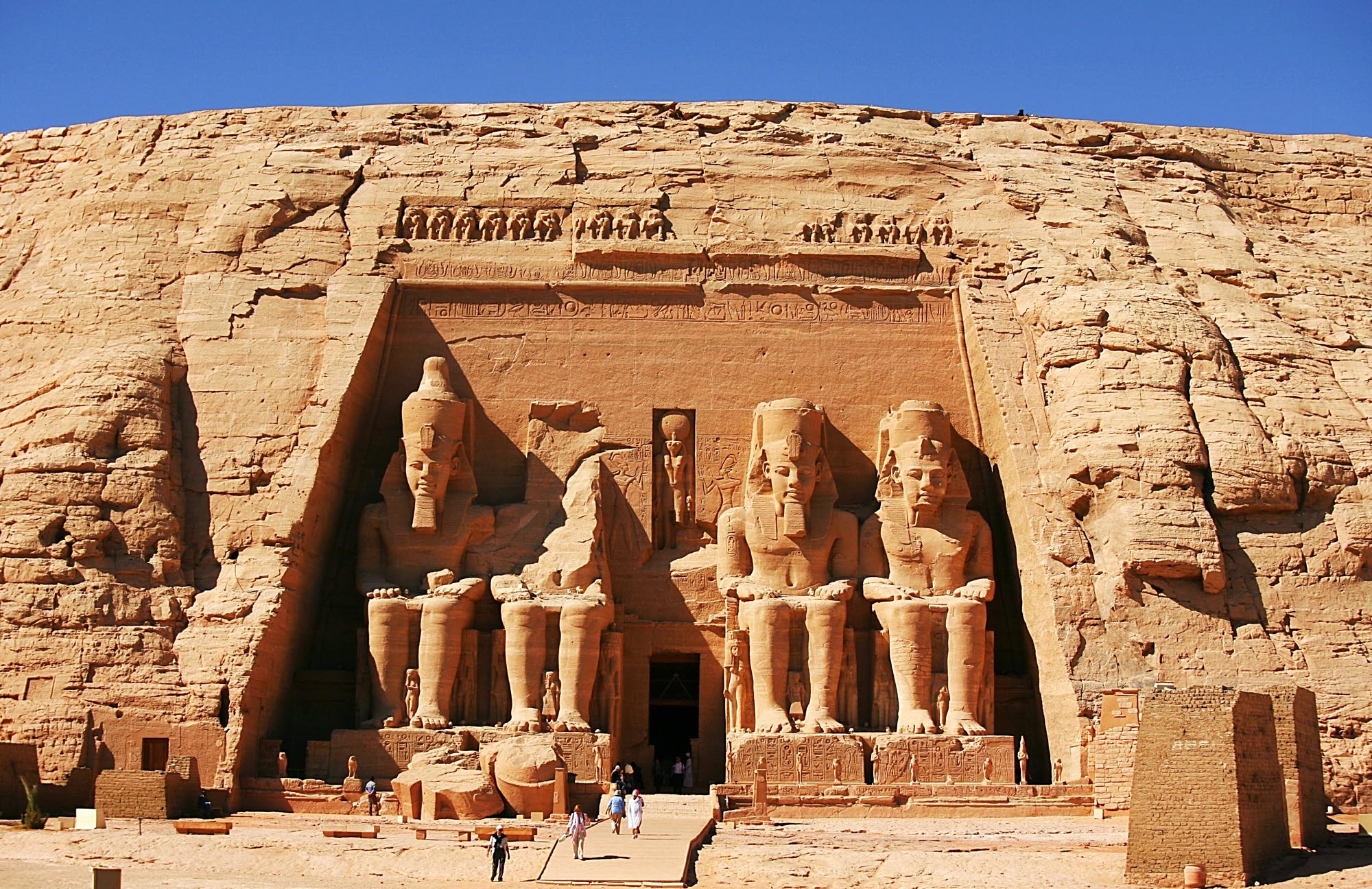 The rising water threatened the ancient monuments in Nubia. It threatened the two temples of Abou Simbel, if the water continued to rise. These temples lived for thousands of years and they tell the story of a great Pharaoh, so it would therefore be a great pity if the temples disappear.

On January 1960, men started to be built the high dam of Aswan while by 1964 good progress had already been made. Across the great river the huge wall of the dam was rising gradually, the higher the dam rose the higher the water rose, the more serious the situation at Abou Simbel became.

Egypt approached the United Nations Organization, where it urged its members to help to save the temples; a number of nations were ready to help and actually offered assistance.

There were a lot of plans suggested for the saving operation but they all had drawbacks, the best one which was approved was the cheapest and the most effective at the same time.

The two temples would be cut into large pieces and these pieces would be put together again but in a higher position and farther from the river which would make them safe.

Work started at Abou Simbel in the spring of 1964, while the building of the high dam had already started. For the first time the Nile was flowing in its new bed, the main river had already been blocked by the dam and the water started to rise. It would soon rise to 132 mts above sea level, while the base of the small temple was 120 mts above sea level and the base of the great temple was 120 mts.

Therefore, to rescue the temples it was necessary to build a dam which would protect the temples against the rising water until the work of cutting the temples was completed, but if the work at Abou Simbel had started earlier, the dam would not have been necessary.

In order to put these dam sheets of steel were used and they were driven deep enough to reach solid ground, about 11 mts deep, with heaps of rocks and sand supported the sheets of steel on both sides.

In order to complete the dam in time they had to race time and finally the engineers managed to win the battle against the rising water, in spring 1965 the dam was completed stretching from south of the great temple up to the cliffs north of the small temple where the water was prevented from reaching the temples and this was a great success.

Now the main task which is cutting the blocks into pieces had to start and the roofs of both temples had to be reached. To reach the roofs the top of the mountains had to be taken away, it certainly wasn't an easy job especially those small pieces of stone might fall down from the mountain and damage the statues, besides these blocks might damage the sacred baboons as well.

The best solution they reached to is to build a wooden frame over the mountains and to cover the statues by sand using bulldozers which poured huge piles of it, and at the same time build a metal tunnel to be used as a doorway between the sand piles in both the small and the great temples.

The four statues of the great temple together with the statues of the small temple were now safe but the roof is not yet secured, because of the rock cutting which would be accomplished might make the roof even fall down.

In order to solve this problem they had to put up steel bars inside the temple in order to protect the walls and support the roof, and joining these bars had to be done by electric machines.

The temple now had to be cut into blocks but they had to be very careful because the temples were built out of sandstone blocks which is a very delicate kind of stone and special treatment had to be taken.

The next problem which had to be solved was how to lift these blocks from the original site to their storage places, while most of the blocks were 20 tons and there were even some of them over that weight. The best solution sorted was to dig deep holes in each block and steel bars were driven firmly into these holes with mechanical cranes used to lift them up.

These two temples were cut into 1042 blocks, with each block marked with a letter and a number in order to be easily put back again in their right positions.

This was first part carried out successfully which was dismantling the temples into blocks without being affected, on March 1966 the United Nations Organization sent them a telegram congratulating them for their achievements so far. The dam which was temporarily had accomplished its job and it was no longer needed so it was removed and the water of the great river was allowed to cover the two large cavities which had the two temples.

In January 1966, work had started again in rebuilding the temples, and by the end of the year the work was completed and they now laid beyond the water of the lake, but this was not the end of the affair because they had to change the surrounding of the temple in order to look genuine dating back to the ancient Egyptian times, so an artificial mountain had to be put up with great quantities of rocks would be placed over the temples. Concrete had to be used to support the walls and the roofs of the temples, so they decided to build a huge concrete domes over the temples and they would protect the temples from the heavy weight over them and they had to be sure that the domes would support such great weights.

After a year and a half the domes and the artificial mountain had been built, so the temples took together with all of its surroundings from May 1964 – the mid of 1968 in order to be completed, and the workers and engineers were proud of what they had achieved together with the whole world and the wonderful temples of Abou Simbel had been preserved.