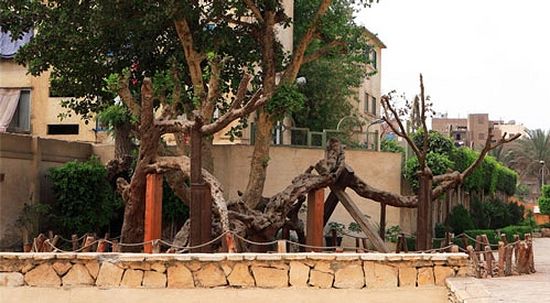 Enclosed within a private garden at Matariah is an ancient sycamore tree, riven with age. its gnarled boughs are supported by posts and stumps, and every branch within reach is either hacked with numberless names or covered with short strips of cloth, tied there by Christians and Moslems alike for it is believed that this Sycamore tree is a medium to divine or magical intercession, or that of itself it possesses these properties, useful for those ill or in trouble or in need of divine aid.

Coptic tradition relates that after Herod had slaughtered one hundred and forty-four thousand innocent children in his angry in determination to kill the child Jesus Christ. An angel instructed Joseph to take Mary and her babe and flee to Egypt for safety. The Holy Family accompanied by a maid set forth secretly by night, Mary riding upon an ass and carrying her child in her bosom, while the provisions were carried by Saloma the maidservant.

Fear of pursuit by the soldiers of Herod forced the Holy Family to travel quickly and they determined to reach Egypt three days after leaving Bethlehem.

A tradition says that the Virgin Mary and the child Jesus in their flight from Herod's wrath, arrived warn and weary near Heliopolis. They took shelter from the burning sun under the wide-spreading branches of a sycamore tree. The tradition goes so far as to say that the Holy Family hid among the branches of the tree and that a spider spans a great web to screen their hiding place from the eyes of Herod's pursuing soldiers.

Not far from the broken and riven trunk of the present tree, which seems to have been planted on precisely the same spot as the original sycamore a spring of freshwater gushes from the ground, a rare sight in this spot. Two traditions seek to explain this Well. According to one story, the Holy Family were very thirsty when they arrived there, their own containers were empty, and there was no sight of a Well in the neighborhood. But the Holy Child, pitying his mother's distress, commanded the water to spring up forthwith. There sprang from beneath the roots of the tree a cool stream of clear, sweet water to quench the Family's thirsty and refresh their bodies. The water of this well remains drinkable, while that of all the other wells in the neighborhood is brackish or salty.

It is also said that Mary having washed her Child's swaddling clothes in this well, hung them on some bushes to dry. In every spot where the water dripped from the little garments, balsam trees sprang up and flourished, and it is said that they would grow nowhere else but in this place. The last balsam tree died in 1615 but two were actually seen here in 1612 by travelers.

The second sycamore tree collapsed in 1906 and the one now standing is an offshoot. In 1869 and the Khedive Ismail presented the tree to Empress Eugenie, on occasion of the opening of the Suez Canal. The gift was gratefully accepted but the Empress, with tact and discretion, preferred to allow the tree to remain in its original place.

Whether the tradition relating to the Virgin's tree is true or not, the garden is a very pleasant place to loiter in.
samegypt-tours