The Holy Family in Egypt

The Holy Family in Egypt 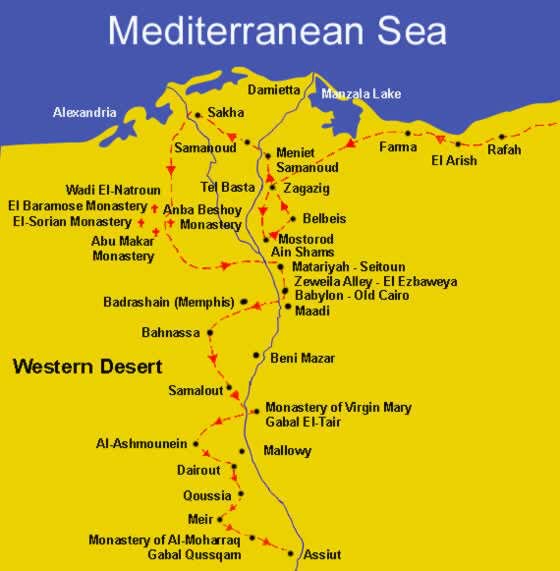 It was Egypt that harbored the Holy Family when they sought refuge from the wrath of Herod. Under the cover of a chilly freezing and heavy rains night, Mary huddled the child to her bosom, and on the back of a donkey, she left Bethlehem (in Palestine), Joseph saddling the ass and Saloma the maidservant carrying the dried pieces of bread and the old clothes in a bag. They journeyed through the famous trade coast highway running between Egypt and Palestine, through which many caravans passed along with camels loaded with spices and jewels and rich stuff from the East and returning back laden with bags of corn and linen yard. Mary legends have gathered around the journey from Bethlehem to Kussia in Upper Egypt (330 Kms from Cairo).

The Holy family arrived in ancient Heliopolis (know known as Ain Shams) and Mataria. According to tradition, the Holy Family rested under the shade of the Sycamore tree which is still to be seen there. It is moreover said that the Holy Child was brought into the temple of On and consequently the idols fell and the statues smashed.

Many legends have gathered around this journey. Some of these are so interesting that we have been tempted to include them. The soldiers of Herod followed the travelers in fierce pursuit and at one time nearly caught up with them: To escape their enemies, Joseph and Mary turned aside and fled through a field of standing wheat, and as they went the wheat closed up behind them so that no trace of their passage could be traced. The soldiers came hot-foot on the Holy Family's track, halted, and asked the reapers whether a man and a woman with a little child had just passed through the field. The reapers, pointing to the flawless sea of golden grain which stretched before them, said that travelers could not pass through a cornfield as birds breast the air and leave no trace of their passage behind them. The soldiers rode off and the reapers hastened after the travelers and when they had overtaken them they knelt with bowed heads before the Holy Child who blessed them, making the sign of the cross over them with uplifted hand.

On their way to Egypt, they came to a deep cave, which they hoped to rest awhile from the scorching heat of the sun. But when they approached the mouth of the cave, intending to enter, they were horrified to find it was tenanted by two lions, Mary and Joseph were about to turn and flee in terror but the Child Jesus slipped down from his mother's lap looking fearless by the wild beasts, speaking to them and forbidding to do harm to man or beast. The wild creatures at once became docile as sheep, and after the Holy Family had rested a while in the cool shade of the cavern they continued journey to Egypt.

The Holy Family advanced southwards and again they stopped at Maadi of today and there they rested in another Pharaonic Temple for Rameses the second. They passed the night within its walls and in the early morning, Joseph noticed a sailing boat anchoring near the bank to be supplied with provision from the village nearby. Joseph asked the sailors if it was possible to carry them towards Upper Egypt, and they accepted against a small amount. Mary, Saloma, and Joseph with the donkey stepped in the boat which sailed in the morning as if it was a steamship. The first stop of the sailing boat was at Fashn (180 Kms from Cairo) where they landed and again journeyed with the donkey southwards till they arrived in Kussia (330 Kms from Cairo) where there they lived in a small room for about six months and ten days. The room is now a chapel in the Monastery of St Mary (commonly known by Deir El Maharrek) and thousands of visitors flock to visit the Holy room which was blessed by the presence of the Holy Child.