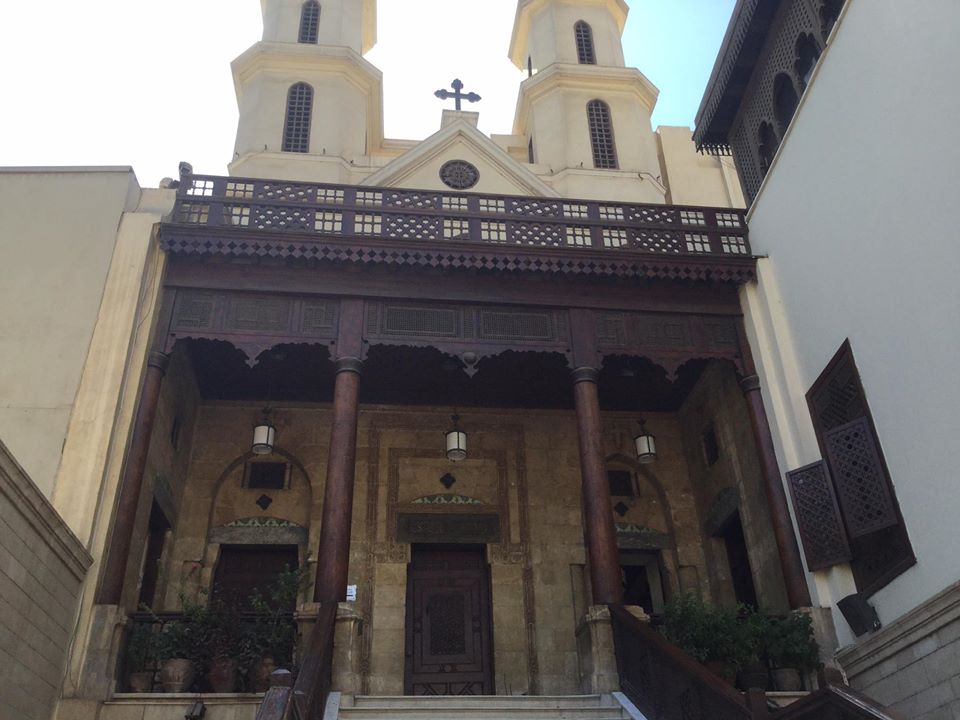 The Hanging Church, the most ancient of churches in the Roman Fortress, derives its common name from its being suspended between two Roman Bastions, and the ascent is made by a staircase built close by one of these bastions.

Authorities differ as to the date to be assigned to the founding of this church. It is said that this church was probably built at the end of the fourth or beginning of the fifth century, as may be testified from a sycamore slab that represents Christ's Entry into Jerusalem on Palm Sunday. The slab was found on the top of the doorway, in the main entrance, and was removed to the Coptic Museum and is now displayed in room 20 under No. 1885. The slab bears the year AD 349 in Greek Characters.

It is also said that the first Church was built after the first Persecution of the Christians which occurred in the reign of Issac the Patriarch A.D. 684/687. A small church was built on the right bastion and at a later time, it was enlarged by adding a new edifice in such a manner that its end rested on the left bastion.

Throughout its history, this venerable church has suffered a series of alternate persecutions and restorations, but despite the international ravages of the former and the unavoidable ravages of the latter, it still retains much of its original form and fabric as well as an impressive charm entirely it's own.

At some time between 823 - 841, the church was almost totally destroyed by order Ali Ibn Yehia, the Armenian Governor of Egypt. But in 880 it was again flourishing and records state that here the Patriarch Khail sold to the Jews the old church of ST. Michel is near the Moallakah, and it is still a Jewish synagogue. During the year 1000, the church was pillaged by Christians and a well was built around the church. From it, great quantities of gold fabrics and silken vestments were stolen nevertheless in 1049 the church was once again in good repair, and services were prayed on it. The most recent restoration was effected about seventy years ago by late Nakhla El Baraty Bey to whom credit is due for having preserved many objects of value.

The church was the seat of the Bishop of Cairo from the time of Benjamin the Patriarch up to Youssab 617-822. In 1038 Patriarch Christodollo removed the Patriarchate from Alexandria to this church. The church was considered as an institute and so many flocked to its great library to consult the many references of Theologian and astronomy's matters. The church may be also considered as a small museum of archaeology as all kinds of Coptic art; woodwork, stonework, painting, lattice wood, etc, are here displayed. The church is approached by an exterior staircase of 25 steps. At the top of the stairs, we find to our right the lodging of the Chief Priest, Father Shenouda. Through a door in front, we find a guest room where the Priest Gossip and offers coffee to his Visitors. Father Shenouda Hanna is the Chief priest of the church and is graduated from the Coptic Theological University of Cairo and is a member of the Coptic Archaeological society.

We come afterward to an oblong courtyard fronting the western side of the church. This courtyard is opened and surrounded by lofty walls lightened above by large pointed arches.

The pavement encloses in the middle a bed of soil in which two palm trees are growing in a kind of large stone flowerpots.

Why do Palm trees adorn this church which is dedicated to Virgin Mary? The legend says that dates formed the first meal while in Babylon. Moreover, the little dent in the back of the date stone (not the cleft) is the mark of her tooth made when she bit into the fruits.

Four doors open to the church proper but only the one to the right is generally used.

The church is of the Basilican order but is unique among the churches of Cairo in being entirely domeless. This is doubtless due to the fact that having been built in mid-air. The architect could not trust the flimsy foundation to bare walls, thick end strong enough, to support a dome. Other peculiarities are the absence of the Choir and transepts, but these omissions may well be due to the many restorations that the building has undergone.

The external plan is rectangular in outline and measures 23.50 long, 18.5 wide, 9.50 meters high. Three rows of columns determine the nave and two aisles; all but one of these columns is of white marble, the exception being of black basalt.

The Baptistery is one of the original parts of the church and is adorned with frescoes that date back to the fourth century A.D. At the eastern end of the church are three sanctuaries containing alters. The central Principal one is dedicated to Mary, that to the north to ST. George, and the southern one to ST. John the Baptist. The Alters are screened by three iconostases of thirteenth-century work and are remarkable for their beauty. The screens are composed of carved ebony and ivory panels. Some of these screens are of very unusual patterns and very beautiful.

The work of the panels in ebony and ivory, following a geometrical system, shows remarkable taste and mastery of the technique of joinery. One is unique, having above and below, narrow panels of carved cedar and ebony alternately, chased with rich scrollwork and interwoven with Kufic inscriptions; the framework also is of cedar, wrought into an unusual star-like device, and the intervals are filled with thin plates of ivory through which the light of the lamps behind falls with a soft rose-colored glow extremely pleasing.

The screen leads to a very ancient and curious little church fortunately untouched by restorations. This church is dedicated to Takla Haymanote the Abyssinian and is now used chiefly for baptism. On the eastern wall and back of the screen, there is an arch elaborated with the painting of Christ among some of his disciples dating back to the fourth century.

The pulpit is ancient, and the most original and beautiful piece of work. It stands on fifteen exceedingly delicate columns arranged in seven pairs with a ladder. The two columns of each pair are identical, but no two pairs alike. They stand on a slab of white marble carved with a wavy outline, and this rests on a base raised nine inches from the floor and faced vertical strips of colored marble. The body of the pulpit is faced in the same way but has a coping of white marble carved with most exquisitely minute and graceful. This pulpit is Arab in character and possibly not older than the twelfth century, yet it is perhaps the most interesting thing left in the church so far untouched by the restorers. It is said that a certain Patriarch named Abraham lies buried under this pulpit.

In addition to the frescoes already mentioned, the church contains several interesting paintings mostly dating from the 17th century. In Particular may be mentioned a striking picture of the Virgin Mary whose dark eyes fellow the spectator with an intense and penetrating gaze, in any direction. On the same screen, there is a beautiful Byzantine Icon for ST. Mark is surrounded by beautiful panels of carved cedar. It dates back to the thirteenth century of our Era.
samegypt-tours