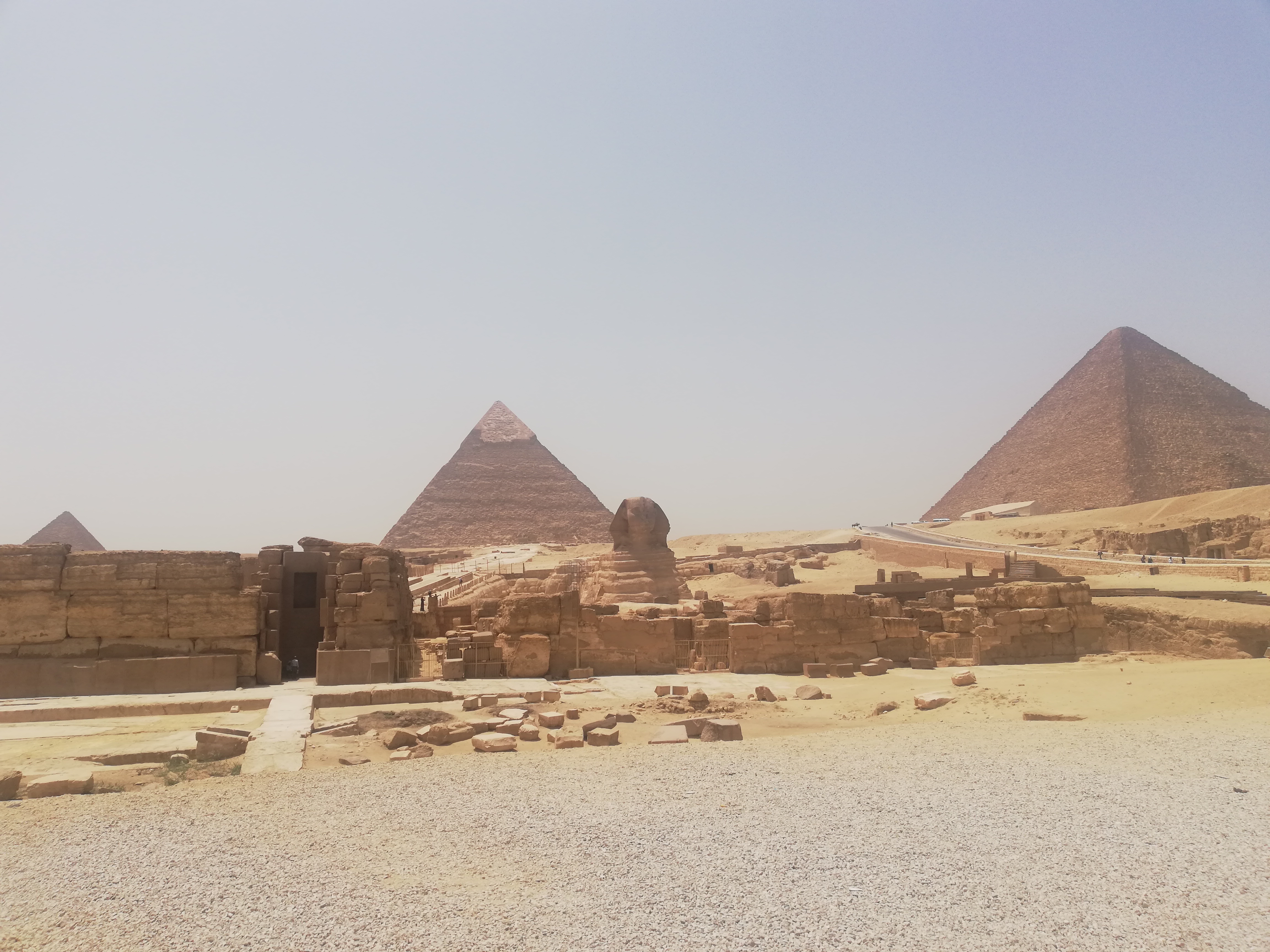 The great Sphinx of Giza ranks with the Pyramids as one of the best known and most symbolic monument of Egypt.

This gigantic man-headed lion is hewn out of the solid rock, a project left in the quarry when stone was being cut for the core masonry of the second pyramid. The forelegs and paws were originally also rock-cut, but from strata of poor quality that eroded as did also parts of the body. When it was carved, no one can tell with certainty. Some say that when the pyramids were young, the sphinx was old. Others say that this knoll was fashioned in the time of the king Chephren into a huge recumbent lion with a human head. The lion figures as the quardian of the gates of the underworld on the eastern and western horizons.

The human head, carved in the likeness of king Khafra, for whom the monument was made, is covered by (Nemes) the royal headcloth of pleated linen and the (Uraeus) the sacred cobra and the symbol of royal divinity that once adorned the false beard. Both of the latter appendages were broken off and are now in the British museum. Although the face has been severely mutilated, it still gives the impression of being the portrait of king Chephren. In the center of the top of the head is a square hole more than a meter deep, this is the socket for a headdress of solar disk and feather which adorned the sphinx on festival days. In its original state the phinx was adorned with colors and many traces of reddish paint still remain on the face, paws and body.   It was hard to realize its true proportions, but when (Mariette) tore away the desert shroud, it was shown to be sculptured out of a single natural rock. The measurements of this wonderful monument are:

Latter generation concentrated more and more on the divine rather than the royal aspect of the Sphinx, and called him Hor – em – Akhet (Horus in the horizon), which the Greeks corrupted to (Harmachis). But a number of votive stelae found nearby refer to the sphinx under the name of Bu and Hol and from this latter designation it was deducted that the modern Arabic name of the sphinx (Abu Alhol), means father of terror. The name Sphinx, a recent one chosen by the classical mythology of the eighteenth century, that being the name of the female monster of Greek mythology who was represented as a winged lioness with a woman’s head and breasts.