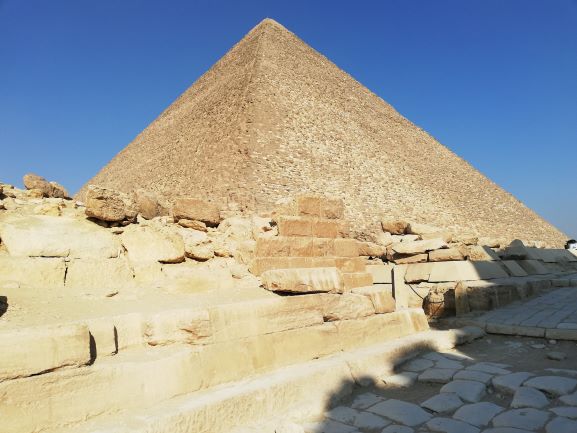 The great pyramid of Giza, one of the Seven Wonders of the World, stands today a silent testimonial to the amazing intelligence of the ancient Egyptians. The pile of stone of the pyramid would furnish enough material to pave an 18 feet highway one foot thick, from New York to San Francisco!!

The Great Pyramid, the largest and the oldest of the group at Giza, was built by command of that mighty Pharaoh, Khufu (Cheops), the second king of the fourth dynasty (about 2560 B.C). The architect of the pyramid and vizier was (Heminu). The name of the king was found written in red upon the blocks of the stone inside it. The pyramid was built to serve as the eternal home of the king and was named Akhet Khufu (the horizon of Khufu)., a fitting name for a monument where the dead king would eventually lie in the west as the sun sets behind the western horizon, and which would also be the horizon from which, like the Sun God, he would arise to his new life beyond the tomb.

Of Cheops life history nothing is known, but his native town was Menat Khufu, a town lays about 170 miles south of Cairo.

More reasonable is the statement of Herodotus that an army of men, numbering 100,000 was employed for a period of three month every year. This would have been during the time of the annual inundation when agricultural work was at a standstill.

During the other nine month, some 10,000 quarrymen were busy extracting the stones for the mighty structure. That for the core masonry was quarried locally, but the casing stones of the fine white limestone came from Mokattam Hills.

The thousand men were divided into gangs; each gang had its own distinctive name. Foremen these gangs in the quarries registered everything, and each block of stone was duly marked with signs denoting the name of the quarry and the gang of quarrymen and its place in the pyramid.

Herodotus related that provisioning of the workmen was undertaken with great care, and estimated that a sum equal to $ 1000,000 of modern currency was spent upon the radishes, onion, garlic and lentils. He records also that ten years were required to build the gangway. It measured 3050 feet by 60 feet and its elevation at the highest point was 48 feet. The gangway was necessary to drag the blocks.

The construction of the actual pyramid covered a period of twenty years.

The monument is said to be composed of about 2,300,000 separate blocks of stone, each of which is not less than four cubic feet and averaging some two and a half tons in weight and reaching a maximum of fifteen tons.

The original entrance to the pyramid is not at present accessible, but it may be seen, marked by its diagonally laid roofing slabs, on the north face above the present entrance. The entrance which we use today is in reality a forced hole made by treasure hunters, and is known as the passage of Maamoun the son of Haroun El Rashid. This passage is about 45 feet from the ground level and is situated in the thirteenth layer of masonry.

The pyramids were opened by the Persians during the 5th and 6th centuries before the Christ then also by the Romans.