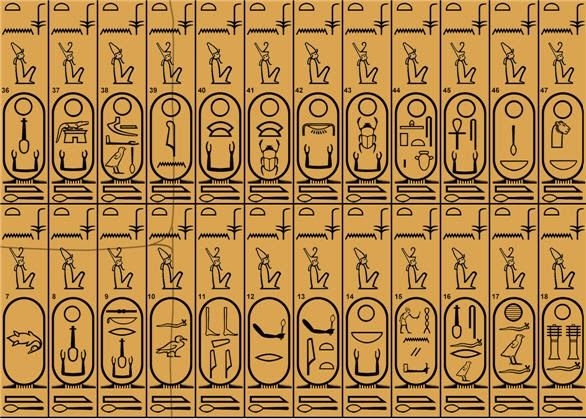 Through the midst of an arid waste, in the north east corner of Africa, the river Nile flows and bringing from the Ethiopian region  very rich alluvial deposits that through the ages formed a country of an extreme fertility and productivity, so this for sure the land of Egypt.

It is a huge museum extending over 1200 km where many temples and pyramids stand today as they have stood for over fifty centuries. It is as Herodotus said, remarkable for the many wonders that would be quite difficult to describe.

Egypt is the oldest country in the world, and from remote days it has exerted a spell upon the minds of all who visited it. So nobody can deny that Egypt was the first land in establishing a system of administration and a capital where the administrative centre lies.

The ancient Egyptian history is divided into three different kingdoms and thirty dynasties.

The two lands had been unified for the first time into a single state by the king Narmer or called Menes and establishing the first capital in the world to be Memphis.

An important period in the history of Egypt, many pyramids and temples were established.

Powerful kings of the 11th dynasty and 12th dynasty had organized Egypt again into a strong centralized state.

The 18th dynasty produced a number of very able rulers who reasserted Egyptian control over the whole country and in western Asia. Most of the kings of the 18th to 20th dynasties were buried in the Valley of the Kings. Founding Luxor temple, Hatshepsut's temple and many additions in Karnak temples.

After defeating the Persians, Alexander the Great entered Egypt late in 332 BC and appointed Ptolemy Soter, one of his Mecedonian generals, as satrap. One of the most important decisions taken by Alexander was the foundation of the new capital named, after him, Alexandria.

The defeat of Antony at Actium in 30 BC and Octavian’s pursuit of him to Egypt put an end to Egypt’s position as a sovereign state.

In 62 AD Saint Mark came to Egypt and settled in Alexandria, the capital of the Nile valley at the time and in the meantime it was the centre of the Hellenic culture. After a short time Saint Mark was killed for protesting against the worship of Serapis. During the first three centuries the Christianity was much persecuted by the roman emperors. Early in the fourth century, the Emperor Constantine 324-337 who was a friend to the Christians made Christianity the official religion and the menace of the persecution came to and end. Christianity spread, the monasteries and churches were founded.

AS in all stages of history Amr ibn el-As; the general, immediately constructed the mosques destined for the performance of his religious devotions. A new city was founded in 641 AD called AL Fustat to be the Islamic capital of Egypt.

In 62 AD Saint Mark came to Egypt and settled in Alexandria the capital of Egypt at that time. He sown the seed of Christianity and was quick in bearing fruit. Churches and clusters sprang up even in the eastern and western desert and between the mountains. Saint Mark was killed after a short time for protesting against the worship of Serapis and more than 141,000 Christian was killed by the hands of the Roman during the first three centuries so why they were obliged to assemble in the catacombs. The Copts to this day reckon the first year of their Calendar as from August 29th.284, when many of their leaders were laid from their lives rather than abjure their belief in Jesus Christ.

By the beginning of the fourth century the emperor Constantine 324 made the Christianity the official religion and put an end the persecution.

The most important churches:-

The name is driven from being suspended between two Roman Bastions.

*the church of Ab Seifein;

It means the one of two swords and this name was given to it because it was dedicated to Saint Mercurius who had two swords.

This church was dedicated to St Sarguis and could be the oldest place of the Christian worship in Egypt.

Egypt with its numerous and huge admirable monuments which represent all the stages of its long history, occupies a unique position in the world. These monuments are the best testimony to the standard of civilization that this country attained throughout successive ages.

Islam appeared first in the Arabian Peninsula, and from there begun its advance.

What does the word Islam in itself mean?

The religion of Islam is not named after a person as in the case of Christianity after the Christ, Buddhism after Buddha, but the Arabic word Islam mean the submission of one’s will to the true holy god worthy of worship and any one who does so is termed a Moslem. The Islam is the religion was given to Adam and the religion of all the prophets sent by Allah to mankind.

In Egypt are about 90% Sunni Moslems and the others are Coptic orthodox and the holy book of the Moslems is the Koran.