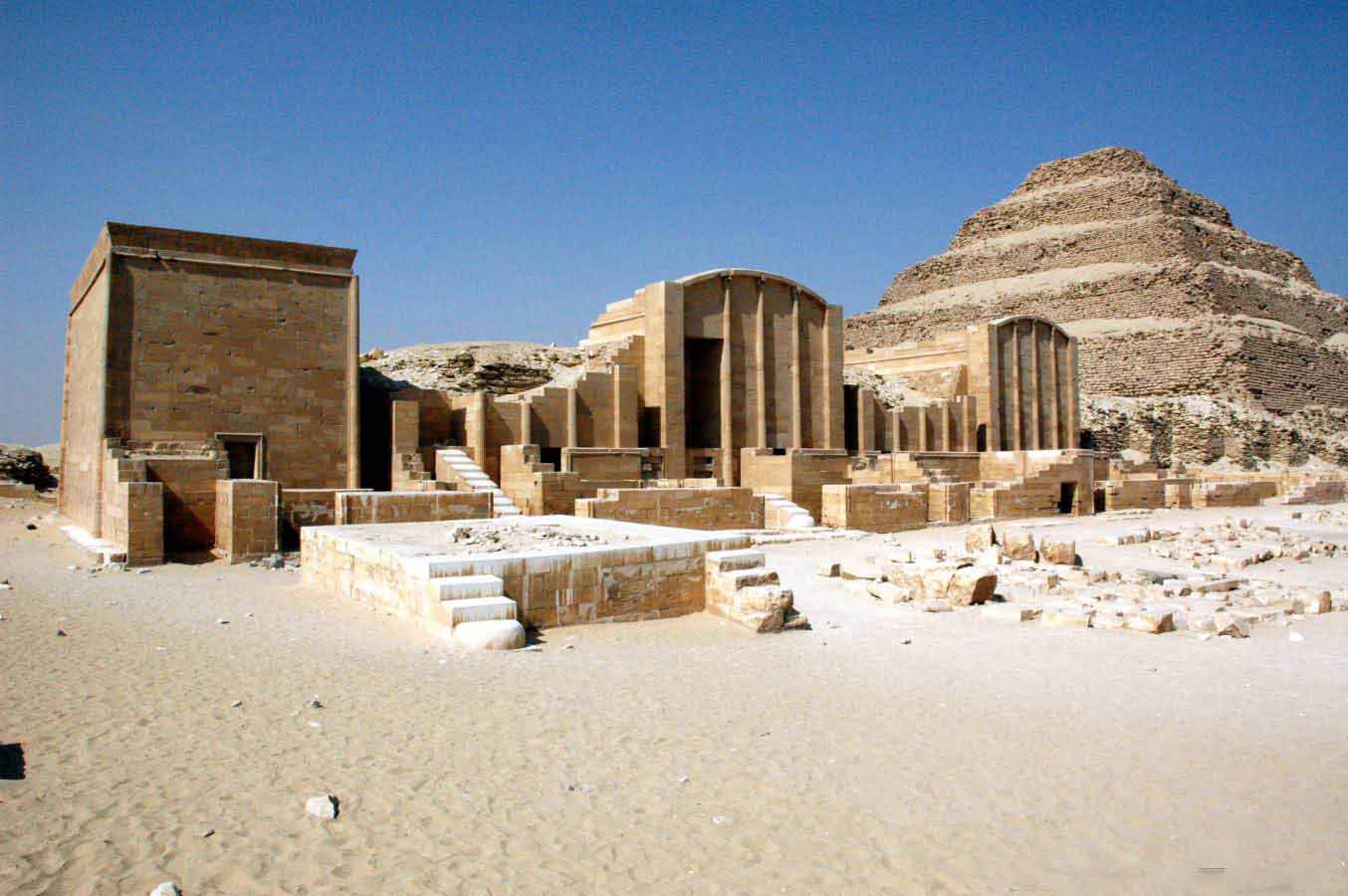 Leaving Memphis, and travelling westward over an excellent road for four kilometers, and ascending the sandy plateau, we come to the vast graveyard, the greatest Necropolis of Sakkara in which the Memphite Pharaohs and inhabitants of their capital city were laid to rest. As a royal Necropolis Sakkara has now been proved to date back to the First Dynasty (3200 B.C.) and the huge tomb of (Hor Ahe), the successor of king Menas, was found there in recent years.

The name Sakkara, as we have already said, is derived from the Falcon headed God (Seker) an Egyptian local God of the dead, who was also connected with the resurrection of the dead.

Sakkara is the only place in the world where we can see the oldest free standing stone structure ever discovered, still standing on its original site. The excavated area extends along the Libyan Desert for about four miles length and two miles width. It is now fenced off, and visitors must pass through the main barrier where tickets are available to those who have not previously acquired them in Cairo.

The Necropolis has been as wonderfully preserved as though it had some share in the immortality of the soul of its inhabitants that rest Osiris. The burial places of the Pharaohs have out lived their cities because they regarded their houses as temporary dwelling places, and their graves as eternal homes. Their lives on earth as a brief sojourn and their death as eternal life.

The most important monuments of interest here are the Step pyramid and its complex, the pyramid of Unas, the Serapeum, the mastaba (tomb) of Ti, the Tomb of Ptah Hotep and the Tomb of Mera (merruruka).

Early Tuesday morning, His Excellency the Prime Minister Dr. Mustafa Madbouly and Dr. Khaled El Enany, Minister of Tourism and Antiquities, accompanied by Dr. Mustafa Waziry, Secretary-General of the Supreme Council of Antiquities, visited the site of the discovery of new burial shafts that contain a huge number of colored coffins that were sealed for more than 2,500 years, in addition to colored and gilded wooden statues in Saqqara archeological site.
This new discovery is from excavation work of the Egyptian archaeological mission working.

Dr. Mustafa Madbouly was keen to go down one of the three newly discovered burial shafts, to see first hand the new findings and the coffins that were revealed inside the shafts.

Dr. Madbouly thanked the Minister of Tourism and Antiquities, the Ministry’s staff, and the Supreme Council of Antiquities for the effort made by this team of archaeologists, that has made unprecedented discoveries

Dr. Khaled El Enany expressed his gratitude to the Prime Minister for the great support the Ministry receives from the government. This support has helped in making all these important discoveries. This support also led to the completion of many archaeological projects and new openings that have been praised by the whole world. He added that there 5 museums before the end of 2020.
Details of this discovery will be announced during the next few weeks in a press conference in the Saqqara archeological site, after that is after completion of the archaeological documentation and photography.

Dr. Mostafa Madbouly made a video where he thanked the Ministry and expressed his great pride in the unique Egyptian civilization.

The Egyptian archeological mission had announced during the past years a number of important archaeological discoveries in Saqqara archeological site, the last of which was the discovery of 59 colored sealed coffins with mummies in good condition. Preliminary studies show that they belong to senior statesmen and priests from the 26th dynasty. This recent discovery was announced at an international press conference in early October

Ministry of Tourism and Antiquities