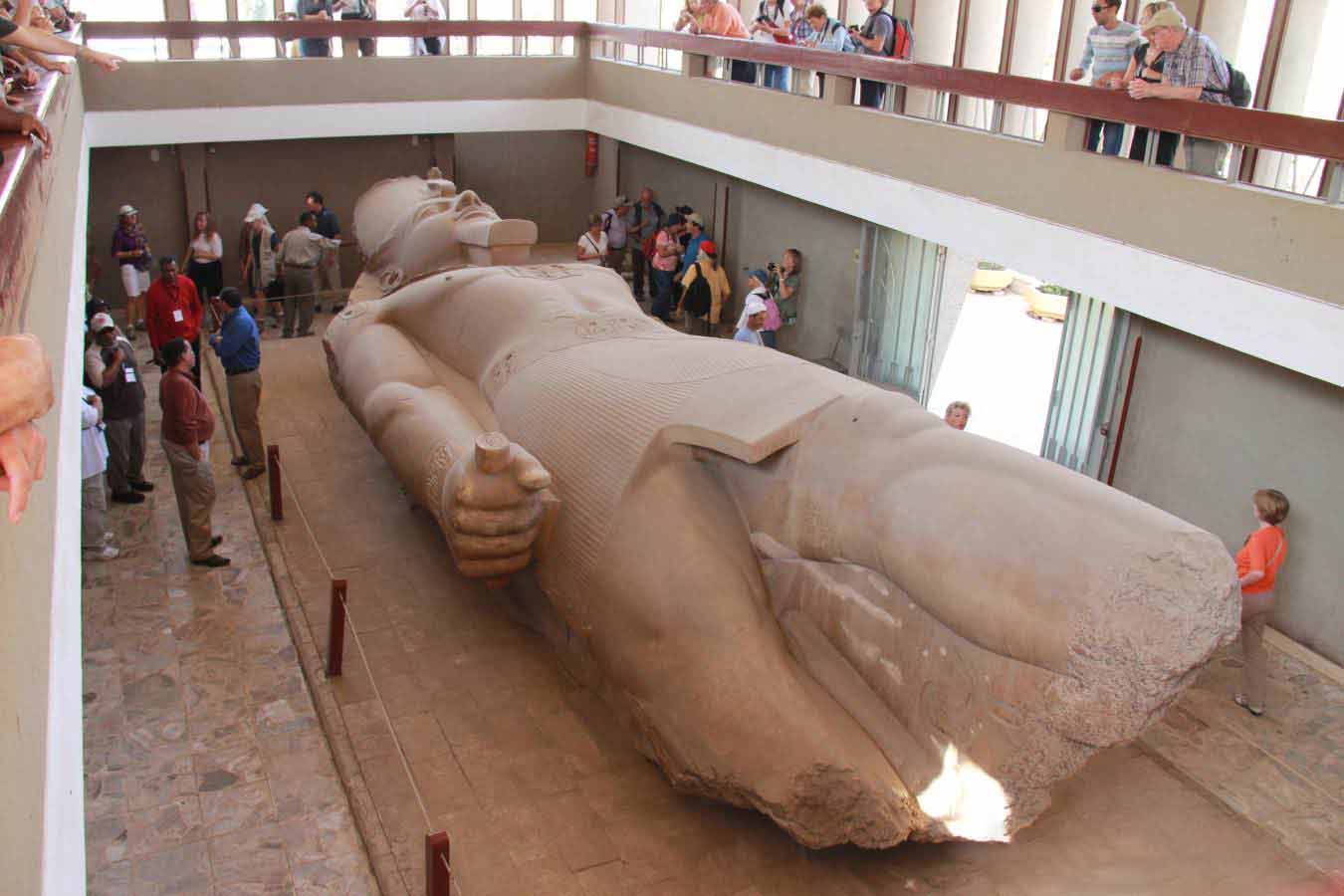 Let us turn our steps to one of the most famous capitals of the ancient world, the first historical capital of united Egypt, Memphis which dates back to 3200 B.C.; to visit the earliest monuments of civilized man.

The trip is very easy and comfortable, a matter of 22 miles drive on a very fine asphalted road to Badreshein. After Badreshein, we motor over a road winding through open fields, and before us, we see to the west nothing but groves of palm trees which are among the finest in Egypt, and how could they be other than flourishing for they are rooted in a soil where once stood for thousands of years, the most populous city in the world.

Among the palm groves appear the houses of Mit Rahina village, to the southeast of which are the main remains of the ancient city.

Prior to the First Dynasty, Egypt was divided into two separate kingdoms: Upper and Lower Egypt. Menas, a powerful Monarch of Upper Egypt, conquered Lower Egypt and united the two kingdoms under his sole power. To keep a firm hand over his new subjects, and in the meantime to control Upper Egypt, he decided to build a new capital city near the junction of the two lands. His choice fell upon a spot some 22 miles south of where modern Cairo stands.

In order to clear and protect the site for his new capital city, King Menas constructed a vast dam to the south of it and diverted the course of the Nile away from the Libyan Hills. When Herodotus traveled in Egypt around 454 B.C. the dam was still carefully kept up and annually restored by the Persian Governors. Menas chose the west bank of the Nile to place his new capital In order to have the river as a barrier between the city and the restless nomadic tribes of the Eastern Desert, whose incursions were a continual danger, to Lower Egypt. To ensure the greatest protection to the capital, he built a fortified citadel which was known as the white wall. Assyrians and Persians regarded Egypt unconquerable as long as these walls stood.

One of the most famous sacred animals in Memphis was the Apis Bull, worshipped as the incarnation of Osiris.

Nowadays the only relics which bear witness to the former splendor of that ancient city and still stands where Memphis once stood are the two colossal statues of Rameses the 2nd and the fine Alabaster Sphinx excavated in 1912 and a few fragments of sculptured stones and pedestals of statues which were once part of the Great Temple of Ptah.