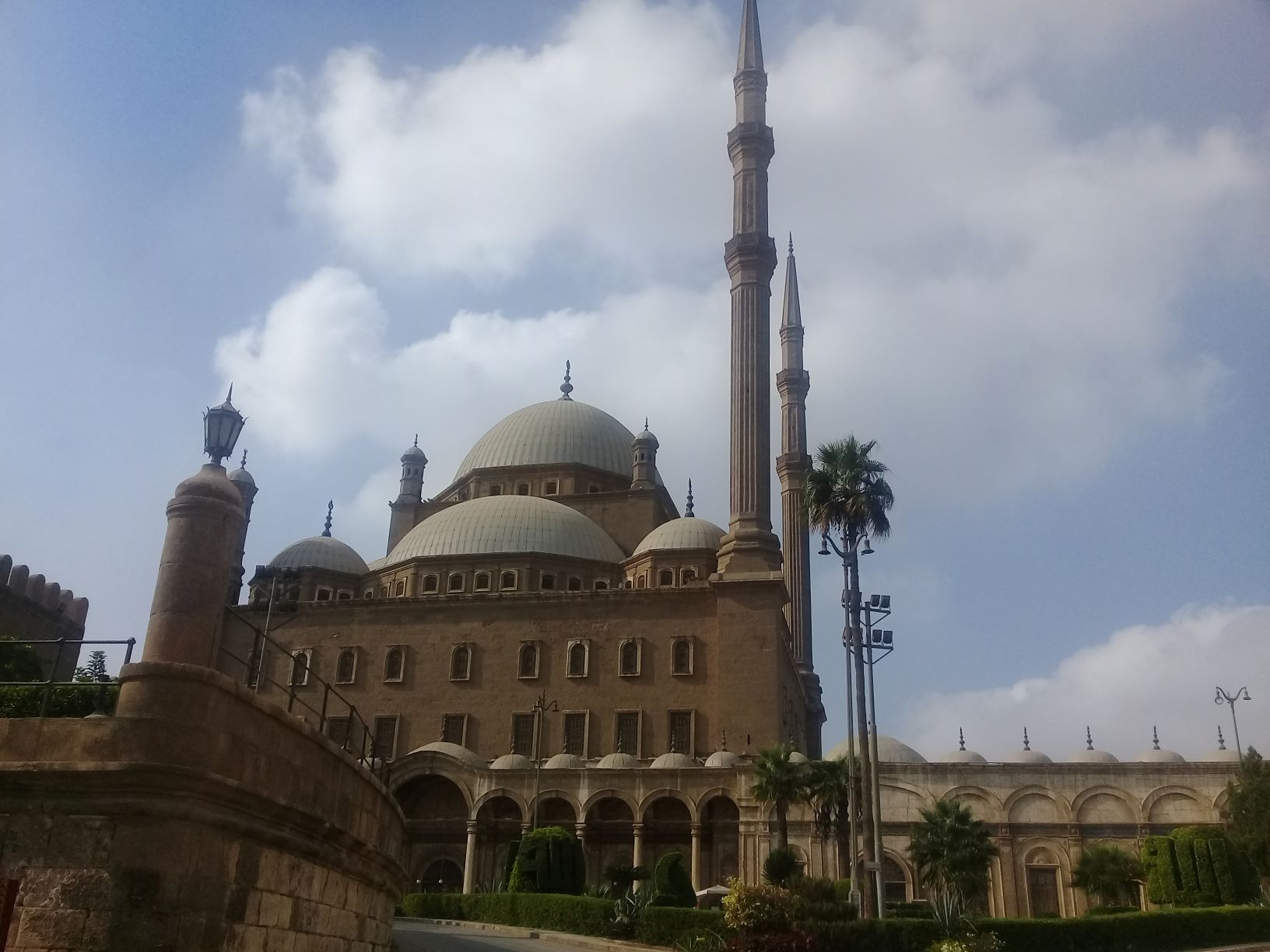 The Mohammed Ali Mosque is one of the landmarks of Cairo and is one of the first features to catch the eye when approaching the city no matter from which side. After completing the construction of the palaces and the different offices of the government, Mohammed Ali realised the necessity of erecting a mosque within the walls of the Citadel for prayer and to shelter his body after death.

The Mosque is also called the white Mosque or the Alabaster Mosque because the walls from inside and out are covered with plates of alabaster quarried at Beni Suef, some 70 miles south of Cairo.

The Mosque is extremely picturesque and is constructed in the Turkish style showing the influence of the Nuri Osmaniya Mosque in Istanbul.

The construction was begun in 1830 o the side of an old Mamluk building. The work continued without interruption till 1849 when Mohammed Ali died. It was almost complete save for some decorations, encrustations, and gilding, which were added during the reign of Abbass.

The architect who was charged to build the Mosque was a Greek and his name was Youssef Bushma. It is said that he was a citizen of Ottoman Empire. Khedieves Ismail, Tawfic and all rulers gave their attention to the Mosque. The greatest attention was given by king Fouad who constituted an official committee to carry out all repairs needed to the walls, ceiling, and domes which involved the expenditure of more than one hundred thousand pounds.

The site of the mosque is unique and enhances the beauty of the building itself which, by reason of its pleasing design and the graceful elegance of its minarets, attracts universal admiration. The Mosque is square in plan and measures 41 metres each way. It has a dome in the middle 21 metres in diameter and 52 metres in height resting on four large arches supported by four massive piers. The dome is surrounded by four massive semi domes. The walls and piers are lined with alabaster to the height of 11.30 metres with coloured ornament above.

The interior displays the attractive handwork of Egyptian craftsmen, inscription friezes, marble mosaic panels etc. the ground plan of the mosque is rectangular and is divided into two main sections; the eastern which is the mosque proper, and the western which is occupied by outer court.

Lying to the west of the mosque is the forecourt, measuring 53 by 54 metres, and enclosed by vaulted galleries with an underground water tank which originally supplied water for the mosque. The courtyard is paved with marble and surrounded with an arcade under a series of little flat domes. The walls are pierced by 46 windows which overlook the exterior of the mosque. The eastern wall forms part of the mosque proper and has eight windows adorned by friezes with Koranic inscriptions. In the middle of the court stands an octagonal ablution cistern covered with a carved alabaster dome above which there is a large dome supported by eight columns designed after the Turkish style and used for ablutions obligatory for the faithful before praying.

In the middle of the western gallery is a clock tower a pavilion built in the Moorish arabesque style to contain the clock presented by king Louis Phillipe of France in 1815 in return of the obelisk deprived from its place at Luxor temple and which now adorns the place de la concorde in paris. The clock was out of order for a long time and was only repaired in 1942.

The mosque proper stands a square court each side of which measures 4 meters and is surrounded by a large dome 21 meters In diameter and 52 meters in height. The two lofty slender minarets rise up to the sky for 84 meters, like arrows aimed at the fleeting white clouds. Each minaret has 250 steps. The eastern Wall has the niche Mihrab on the right of which stands the new alabaster pulpit lately erected. Close to the alabaster pulpit stands the ancient pulpit which is considered the greatest in Islamic world. The western wall is surrounded by a terrace supported by eight alabaster columns with a balustrade which can be reached by the staircases of the minarets. At the south eastern angle a brass railing encloses the tomb of the founder.

The interior is artistically decorated with rich and beautiful colours, displaying the attractive handiwork of Egyptian craftsmen. Visitors will be surprised by the streaky mauve marble mosaic panels, the abundance of electric lamps, the priceless carpets, and the stained glass windows. Unforgettable is the experience of seeing these lamps lighted only on special occasions, casting their colouredful reflections throughout this richly decorated temple of prayer.

Towards the end of the 19th century, the mosque showed signs of cracking. It was repaired in 1899 but the repairs were not decisive for shortly afterwards more cracks began to appear in different parts of the mosque. A scheme for its complete restoration was drawn up in 1931 and the scheme was completed after ten years at a total cost of L.E. 100.000